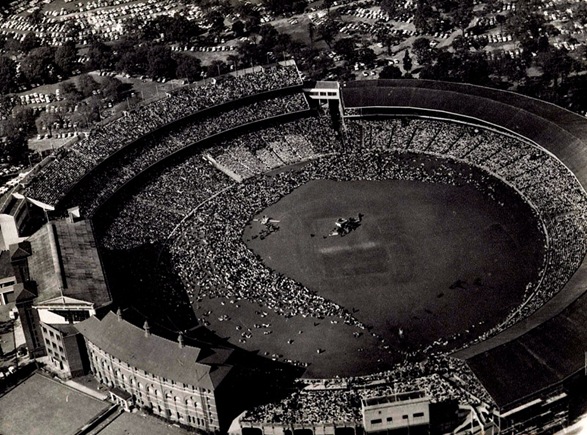 In 1959, Evangelist Billy Graham came to Melbourne, Australia, and set the unbroken record for the largest crowd at Melbourne’s biggest outdoor stadium, the Melbourne Cricket Ground. His event attracted over 130,000 people!

Last night, I read one of my city’s most read newspapers, as they reported on Billy Graham’s passing, and this momentous event. I was struck by an undeniable reality.

The Newspaper: “The Herald Sun”.

The Undeniable Reality: that the environment surrounding Billy Graham’s record breaking event was this, a UNITED CHURCH for the sake of this event.

As I read this article on a united church and a record breaking crowd, I began to think “THAT IS WHAT WE NEED NOW, MORE THAN EVER!”

I believe that one of the key ingredients for revival, is unity, within each church and between each church (I wrote about this in my previous blog).

Reinhard Bonnke and Daniel Kolenda of CFaN, just held a large scale evangelistic “crusade” in Nigeria with 750,000 in attendance.

Ben Fitzgerald and the Awakening Europe team are regularly seeing over 20,000 gather and thousands saved in what many would now call “secular” countries such as Germany, the Czech Republic and Sweden.

There are literally hundreds of thousands of people now in heaven because Billy Graham dared to do then what we now know works today.

The amazing thing for you, if you’re an Australian Christian, is this, if you’re as convinced as I am that the church desperately needs unity and revival, you don’t have to go and plan your own large scale event tomorrow (although you could). You can join in on one that’s already set to happen.

This is a cross denominational large scale evangelistic event, that is more than an event, it is a movement that is championing discipleship, salvations, and revival. It is being said that this will be the biggest Australian “crusade” since Billy Graham’s 1959 event, with over 50,000 projected to attend.

When was the last time you saw over 50,000 people gather in one location in Australia for the sake of the gospel?

Church, it’s time to unite again, it’s time for another great awakening. Do it again Lord!

PS- Know someone who needs to know about Awakening Australia? I encourage you to share this blog or the details of Awakening Australia on your own blogs and social media platforms, as well as in person with your friends, churches, and local communities.

2 thoughts on “Why I believe in Stadium Evangelism like it’s 1959.”