Born with no eyes, but seeing the love of God in action- Day 7 and 8

Have you ever met someone who’s story inspires you?

Have you ever talked to someone and thought- I can learn a lot from this person?

My last two days have been full of such people.

Patrick John has given his whole life to supporting and raising his son, Patrick Henry, who was born with no eyes and an inability to stretch out his limbs.

Because his son needed daily care, his father worked a night shift, so that he could sit with his son through College.

Patrick Henry is now an accomplished author and phenomenal musician, who inspires people around the world (he has been to five continents and appeared on Oprah, Ellen, ESPN and more).

The only way Patrick Henry was able to learn music, travel, write and study, was because of his two fathers. (He has two!!! So do I!!!)

His biological Dad has given so much for his son. His father has laid down his life for his son, over dinner he told me that it is no sacrifice to him, he says that this is his son, what else would he do? He said, he’d do anything for his son.

Patrick Henry, the son, says when he can’t believe in himself anymore, that’s where his belief in God comes in. He says it is because of God he is able to do what he has done.

God’s love is greater than anything. God not only loves us, but sacrificed His own son Jesus, He laid down His Sons’ life, for us. Wow!

Two days of being with the Patrick’s as guest speakers, and also the amazing team at Maranatha and I am pumped to give my life for the cause of Christ and for the sake of others. What could be greater, than laying down your life for another. (John 15:13)

Who is God asking you to lay your life down for at the moment?

By His grace, do it, you could change someone world, give sight to the blind, set a captive free. 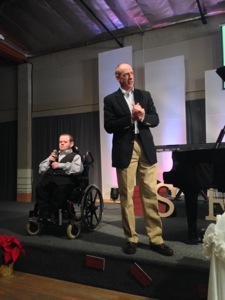